One of the most anticipated events of this year was Drift Challenge Australia Round 1. The brain child of a very well known drifter, Luke Fink, had promised a new style of drift championship. One that does not revolve around money and brands. A competition that is not full of uptight sponsor pressure. One that is fun, exciting, full of close battles, and amazing driver style.

After a 15 hour drive from Victoria I found myself at Raleigh Raceway, NSW. The cows that lived next to the race track didn’t want me to sleep much so I was awake to hear the first car trailer roll in.

As soon as I got in the gate I didn’t waste any time and quickly surveyed the cars that were competing. I was amazed when I came across this piece of history! Probably one of the only surviving cars from the hay day of Australian drift.

A rocker cover that almost looked like a beating heart stood out amongst the crowd. This mighty Nissan was ready to take on the best in the country. This was just a small taste of what was in store for the first day of DCA round #1.

Hidden up the back of the pits stood two very competitive cars that not only looked great basking in the morning sun but also performed at the highest level.

The quality of cars on show was absolutely amazing! Good diversity with style, presence, and character. Did someone say dish?

Briefing was held not in a special room with a fancy whiteboard but instead outside in the open air. The open briefing format allowed for everybody to take part and get involved. Using a tray of a ute for a platform Luke delivered the rules and the expectations for the day.

After briefing was over it was time to get on the track for the first practice season. A dummy grid was quickly formed as everyone was eager to get onto Raleigh Raceway and test out this go-kart track.

With all cars on track it was tine to see what Australia’s most talented drifters could do. All eyes were on track as the crowd built to watch what would be one of the most epic events held in Australia.

From the get go the practice battles were incredibly close. Our boy Jason Ferron took to the track like he had driven it many times. The course starts off tight and low speed then opens to a long straight into a nice sweeping corner.

The track then continues into a longer straight and into two very tight twisting corners that change levels rapidly. This level change combined with a high speed entry added a real complexity to the track.

Surprisingly there were not many car failures for the amount of cars on track. This is testament to the professionalism and preparation of these great drivers.

Before competition had started there was door on door action and the crowd was getting top level battles with no bullshit.

A huge practice session soon followed by the 60 minute to win it comp took up the majority of the first day. 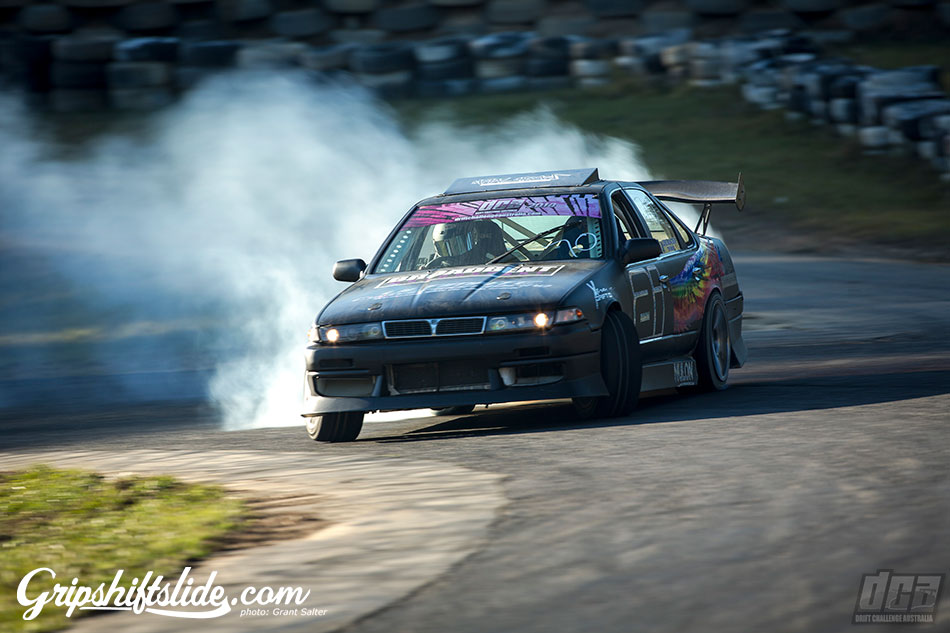 This Nissan Cefiro, driven by Luke Broadbent, was sporting a new look with some Bliss n Eso inspired graphics along with a power plant that many Nissans seem to be adopting lately. V8s in general are the new go to engine in Australia and all around the drift world.

The crowd had a fantastic viewing platform on the side of the hill that overlooks the entire track. Some were even lucky enough to score a couch and have a comfy spot to absorb the action.

One of the cars that really impressed me was the Soarer of Jason Davis that was consistent with great angle. Getting a large car like this around a tight track is no easy feat although Jason managed to make it look easy.

The top 32 was being decided by the judges siting only 15 metres from the most complicated part of the track. They also doubled as commentators for the event giving encouragement and entertaining the crowd with their tongue in cheek commentary.

Jordan Graham in his bullet proof Sr20 powered weapon really performed well on the first day of competition and found himself qualifying in the top 32.

Leigh Pidwell was another driver that really impressed me. He was really the first person to try big entries on the twisty downhill section of the track. He did not stick all of the crazy high speed reverse entries but it inspired others to go big. Unfortunately as exciting as his driving was he spun on his qualifying laps and did not make it into the top 32. I wish there was a wild card entry into the final four because he is one driver that could out battle most pros.

Catherine May was the only Victorian who managed to qualify. Talk about stepping up! Catherine beat three very seasoned Victorian competitors to the spot. She has reached a whole new level with her driving and soon her name will be up in lights like Kelly Wong.

Day 2 bought with it even more sunshine plus a few competitors that had been absent on Saturday because of stadium drift. Now that the drivers knew the track it was time for them to really push the boundaries.

Big wings are made to hold window banners that’s why they are an essential part of drift. While one part of the track was in the sun on the other side in the pits the cars were looking very cold.

Like a purple box of explosions this RB26 is looking the business.

Shaun Gilbert has a unique driving style that sets him apart from the rest of the field. Why you may ask? Well Shaun was driving the smallest car of the day and that meant he was able to get real close real quick. He was faster in the corners, while being very good at emulation and transitioning at speed. Not to mention doing all of this while hitting the correct clipping points.

The real star of the entire weekend was Naoki Nakamura. With every lap he just kept getting better and better. Nailing reverse entries and out battling everyone whilst looking like he wasn’t breaking a sweat! All whilst driving in Crocs.

Both Shaun and Stewy showed what DCA is truly about with serious close battles and plenty of flair. Re-run after re-run there was nothing between them. The judges could not believe how consistent their battles were with not one of them making any real mistakes. Stewy was lucky enough to come away with the win against Shaun.

The team drift competition was won by Naoki Nakamura and Miki Yabuuchi. Team secret drift almost took the prize but the Japanese duo was too strong with steady door on door performance every run.

Naoki Nakamura was the real hero of the weekend. He won his way to the top of the 32 drivers who qualified. Winning every battle with ease and with a car that was under-powered compared to the rest of the field. A real crowd pleaser with a style that no Australian could emulate. The only one who came close was the wild man Stewy Bryant who came a close second place.

After the main competition was over the drifting continued long into the fading light of the sunset. Even the judges of the competition got to drive on the track along with some of the organisers.