Sunday was the final day for the Forum Battle weekend, the show and shine event was all that was left to decide the winning car forum.
Heading to Calder park at 7am it was still raining, so we were unsure how the day would pan out.
Luckily the sun started shining and almost immediately the ground quickly dried up.

Our latest feature car, Pond’s GT-R Nur. Getting all shiny after a very wet drive to the track.

Check out that professional looking banner!

Mark’s crazy clean R31 had a few people stopping to see what was what. 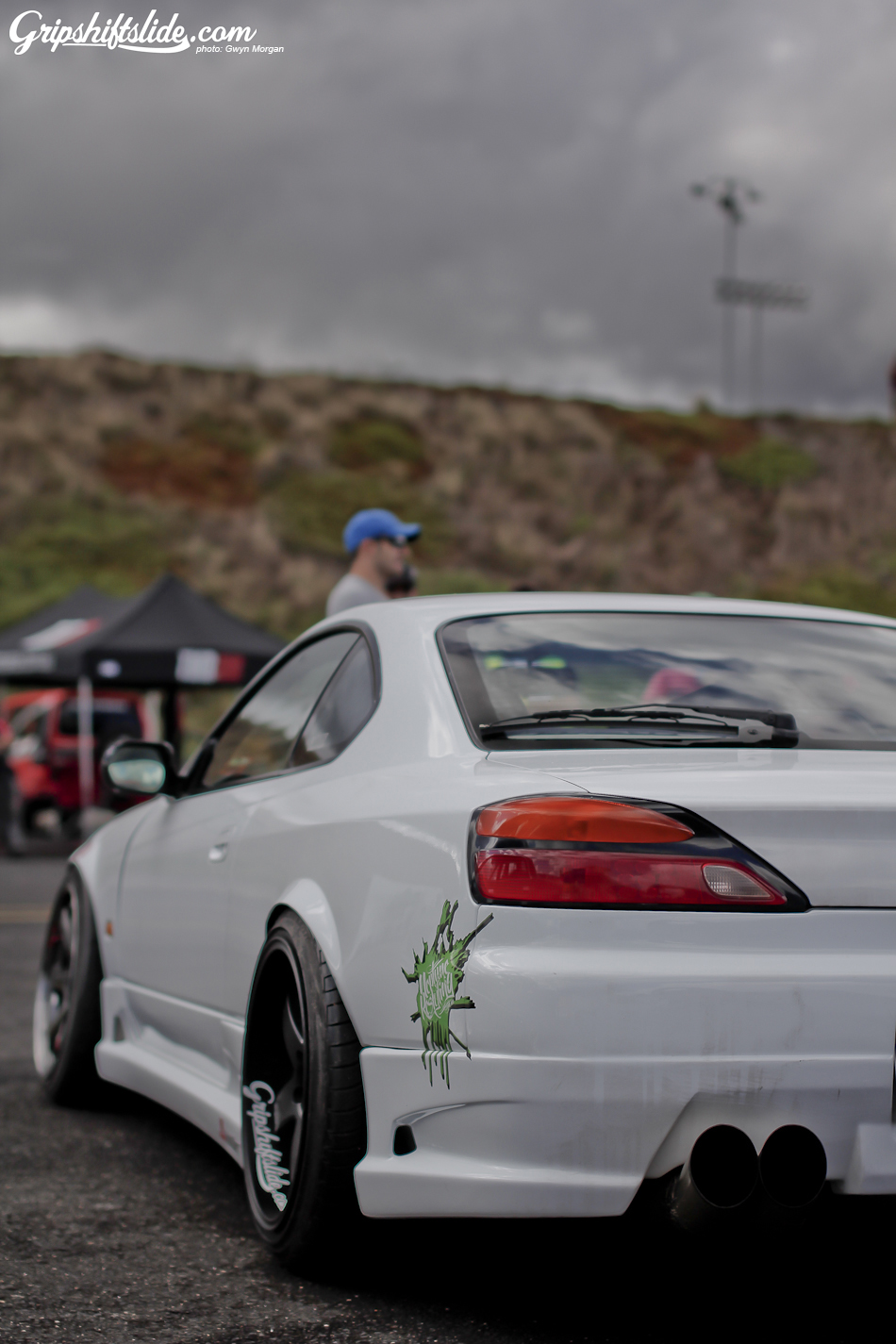 Isaac’s stupidly low S15, this thing is intense! The judges gave Isaac a win and he scored a Zen Garage tee.

Some of the drift demo cars were left to cool down after their only show on Sunday, Vic Drift put on a hell of a show despite the weather. More on the drift demos later this week.

MelbS15 club had a descent turn out for the show, this subtlety kitted S15 stood out…

…Thanks to an interesting wheel choice, you don’t often see a Silvia ‘tucking’ the rear wheels.

Melb S15 club didn’t just have Silvia’s on show, there was two nice Supra’s and a Skyline.

A sneaky S14 hanging out in the pack, It looked great on a set of black Meisters.

Strange wheels on this S15, would love to know how it ‘scored’ that battle damage.

One of the winners from the S15 club, Renee’s beautiful grey Silvia. She scored a set of brake pads, not too shabby!

Some of the guys from the S15 club got restless and started sliding around their ‘RC’ Drifter.

It seems even remote control cars are riding hard, check out that offset!

One of the highlights was this Holden Astra with a blackboard paint bonnet, Zen Garage got in quick!

By lunch the sky was looking a lot better for the show and shine, and soon it was too hot!

One of only two AE86’s at the show, both were spotless!

One of the wildest Evo’s in town, Givan has just put a new set of Work Emotions on and it looks great!

Mark’s R31 managed to score a win for the team and got a few freebies from the Zen Garage crew.

Another win for the team was Michael’s RX Impreza, his car’s built for the track but can be slammed lower than the rest of ’em.

In this setup you literally can not fit a finger between the tyre and the guard, I even tried a credit card… No luck!

The Mighty Car Mods “Blue Turd” still wearing some mud from the gymkhana session the day before.

Agis from Insane Drifters checking over the engine before the car gets loaded up and towed home.

Easily the biggest team at Forum Battle, Skylines Australia had more cars competing than anyone else.

Bringing with them some very impressive and rare cars, like two Nur spec R34’s and this gorgeous GT-R.

The Rays TE37 SL’s looked amazing on this R34. People were staring all day long!

In terms of ‘cool’ nothing came close to this C110 Skyline, It was absolutely pristine and very heavily modified!

Packing an RB26 swap and brakes bigger then a small house, this thing would move very fast!

Some of the other Skyline Australia entries included this immaculate R32 GT-R and a very cool DR30 Skyline.

One of the only domestic cars to enter was this built XR6 Falcon, The owner got to take home a trophy which makes it all worthwhile.

The Skyline boys gathered in the rally starting grid for a display while the group received their club trophy.

The team took out the overall win for the very first Forum Battle.

Thanks to some crazy cars, crazy driving and some of the most dedicated guys and girls in the car scene.

With all the cars lined up it was time for some shots, only something was missing…

Models! Here you can see me concentrating and carefully aligning my shot of the girls…

And here’s the actual shot, magic!

Ash from SAU accepting his trophy and a pose with the Just Car promo girls.

The man behind the event with one of the Zen Garage boys, busy working the awards around the chaotic rally championship. 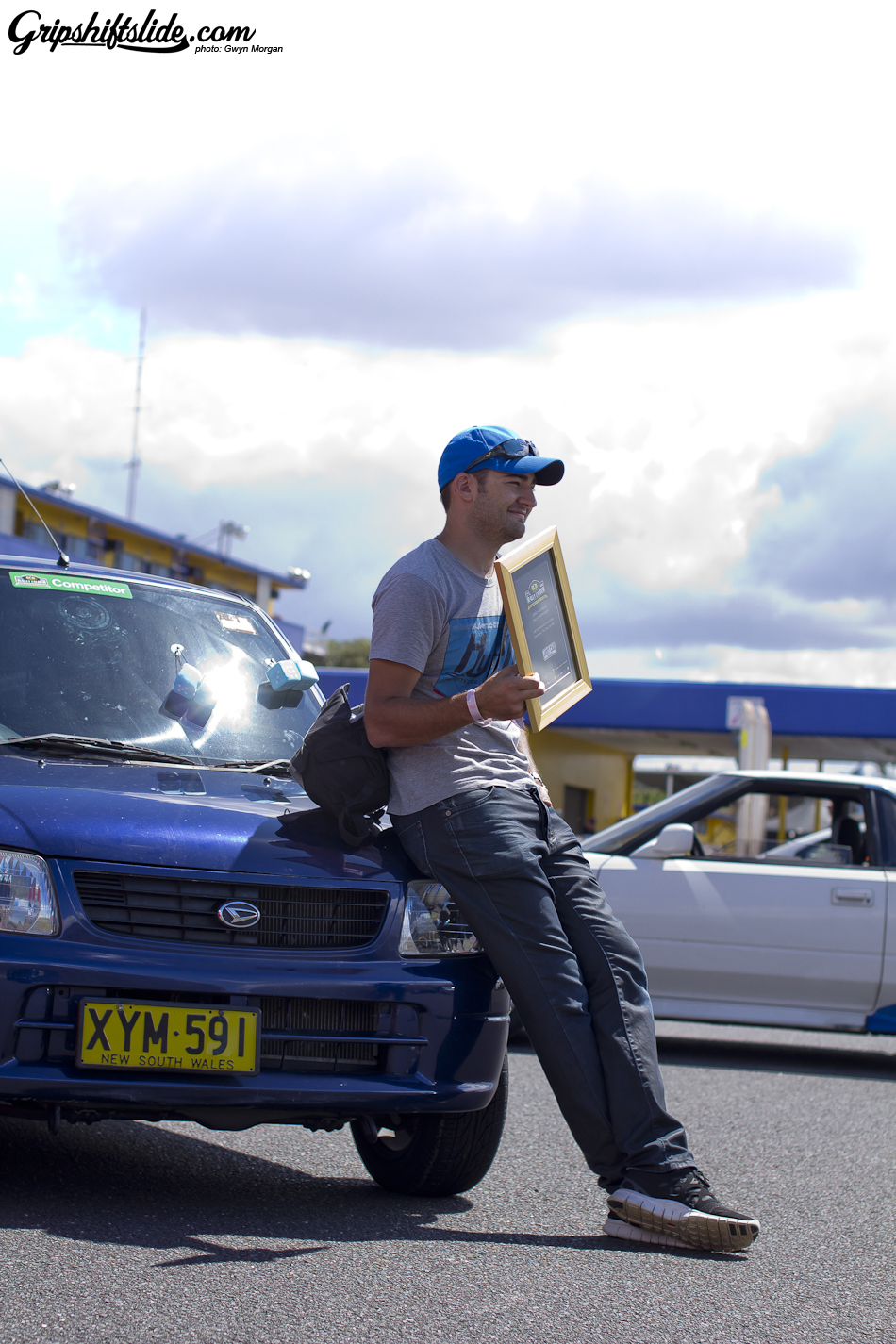 Marty from Mighty Car Mods proud of his trophy for the Gymkhana session, Marty took out one of the front wheel drive awards for the session.

Congratulations to everyone that won a prize and a big thanks to everyone who attended, it was a great way to finish up an awesome weekend of cars, rain and more cars.
There will be a write up on the full weekend coming soon!

Thanks for reading,
-Gwyn.