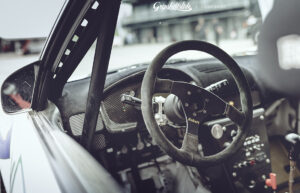 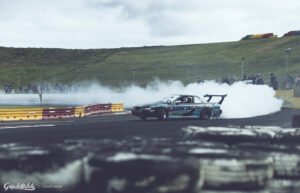 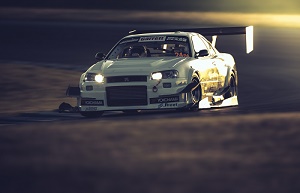 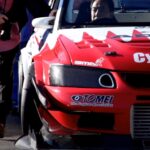 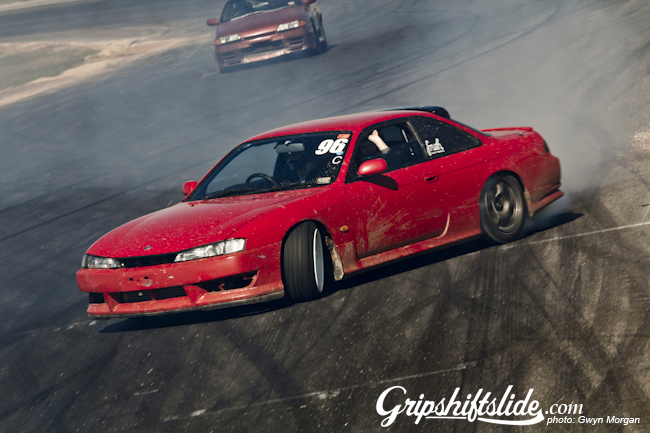 Vic Drift held an open day at Winton Raceway over the weekend, with three classes of drivers and 30+ cars on the track. Things got a little out of hand at times… 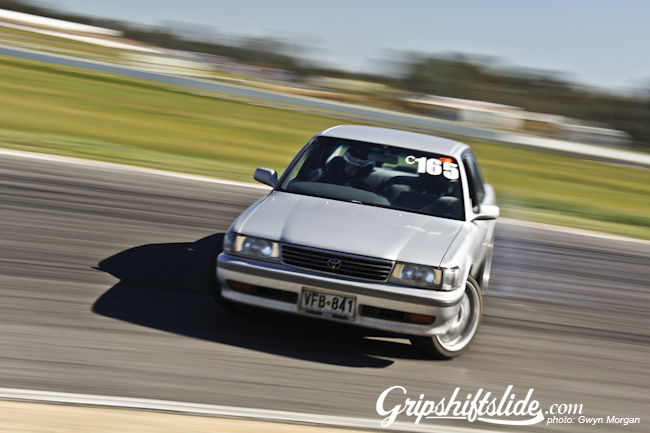 The selection of cars was different to say the least, highlights included a Holden ute, Ford Falcon, WRX wagon and an old Mitsubishi Sigma. None performed quite as well as this full street trimmed Toyota Cresida . 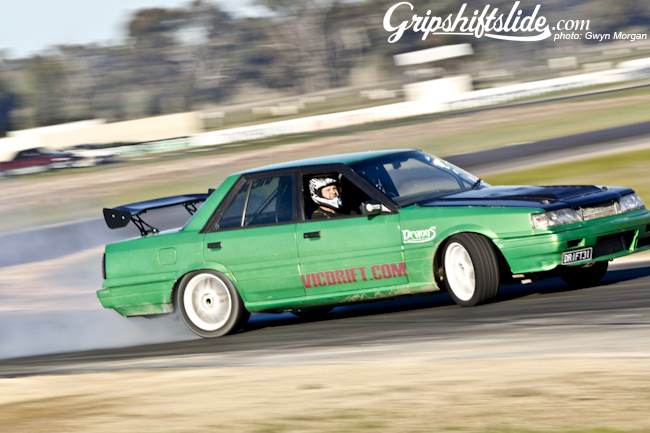 The R31 Skylines were out in full force, with 5 examples on the track at any one time. None could match the smoke show that this green monster put on. 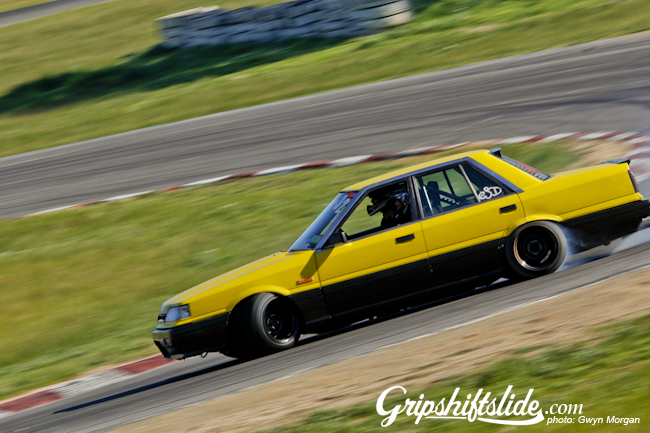 However this yellow Skyline was full of style, the car looked great dumped on steelies. 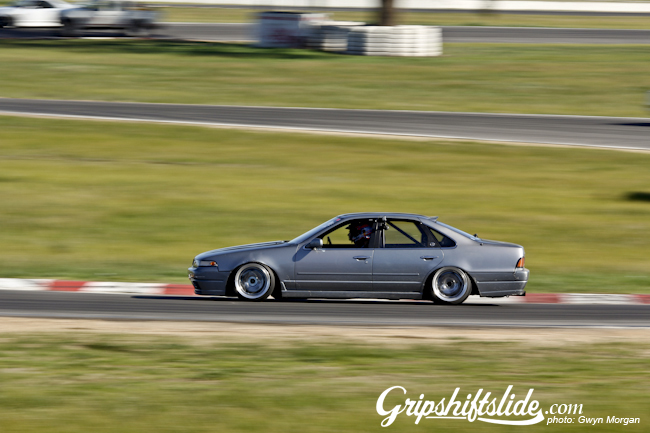 This grey Cefiro had a few mechanical problems early in the day, after lunch it was screaming through the corners sideways again. One of the loudest cars on the day!

The Team Tuffcore boys seemed to have a sticker on nearly every car. Although this Onevia was a little under powered, it still managed some serious angle. 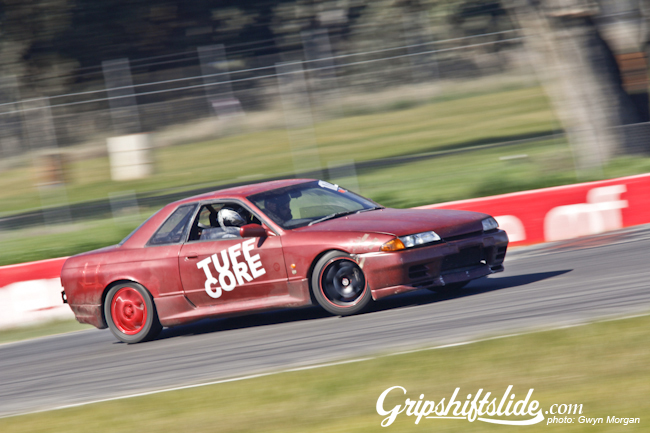 This was the first outing for the Tuffcore R32, I will be keeping a close eye on this over the next few months. The owner, Nick seems to have caught a serious competitive bug in drifting motor sports. 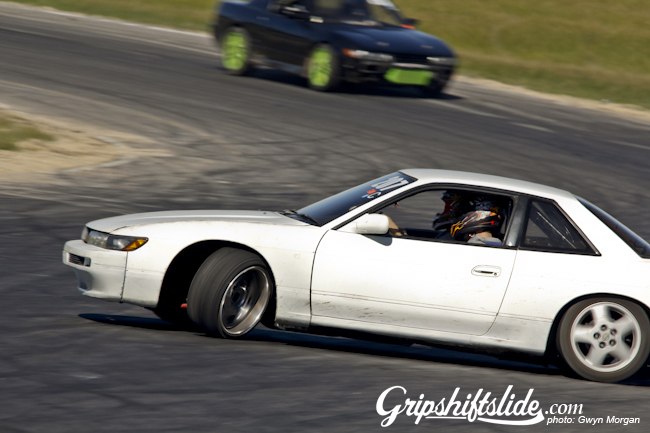 Given the varying skill level of the drivers, spins seemed to be a common occurrence. Luckily the reaction time of drivers was fantastic and there were no major collisions. 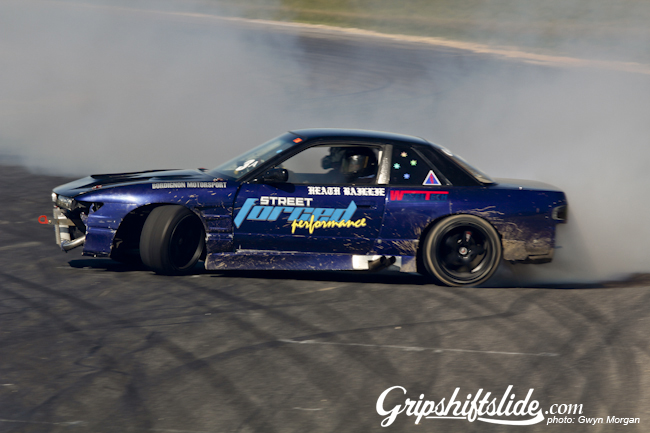 The crowd was rewarded with a smoke screen after this S13 spun on the main straight. 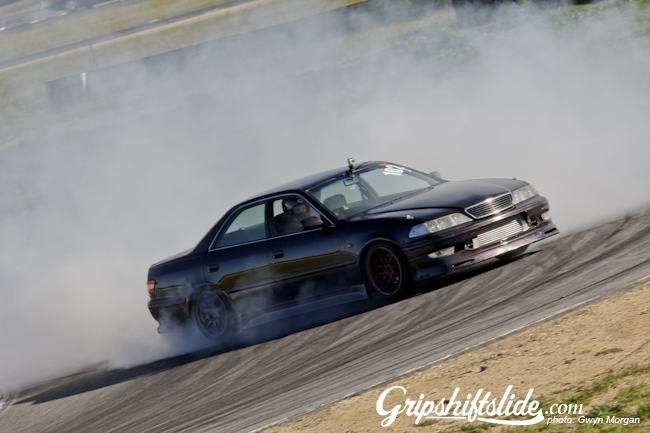 The smoke show was soon topped by this Chasers spin in the last corner. 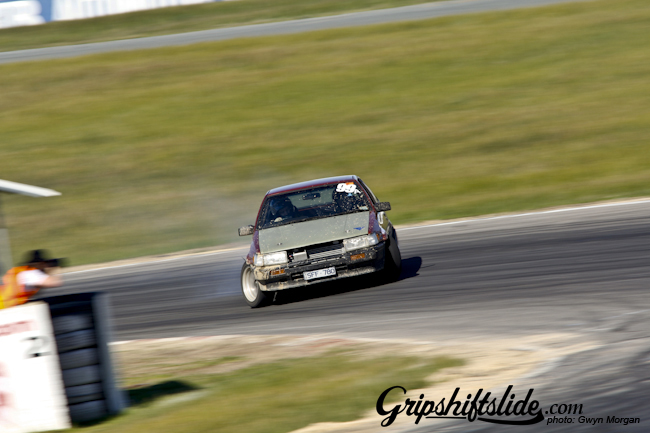 This little brown Sprinter reminded me just how hard these cars can be pushed. 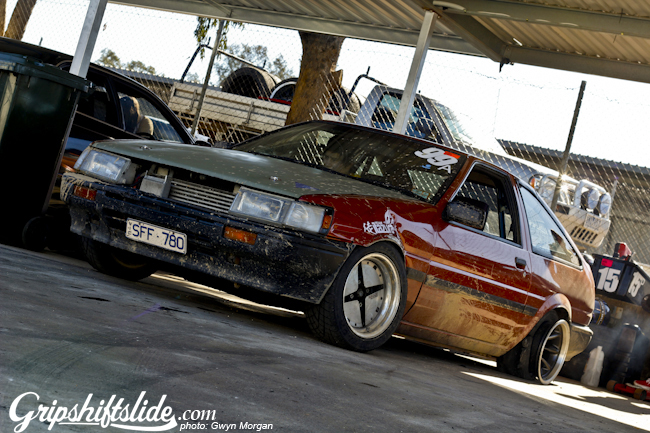 Just look at the rear wheel! 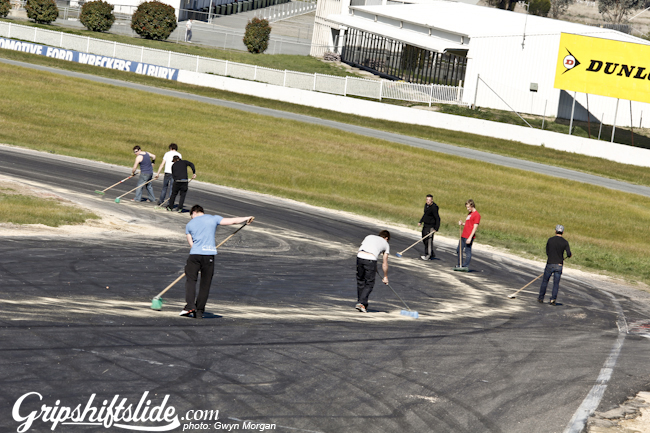 One car suffered a serious oil leak, which meant the track had to be cleaned. Some boys from the crowd were more then happy to get some track time.

Not long after the clean up, the skid show was back on! I hope to see this s14 go up a class next drift day, the driver of this car pulled the best angles of the day!

Despite some questionable airbrushing on the bonnet… this car was a consistent performer. 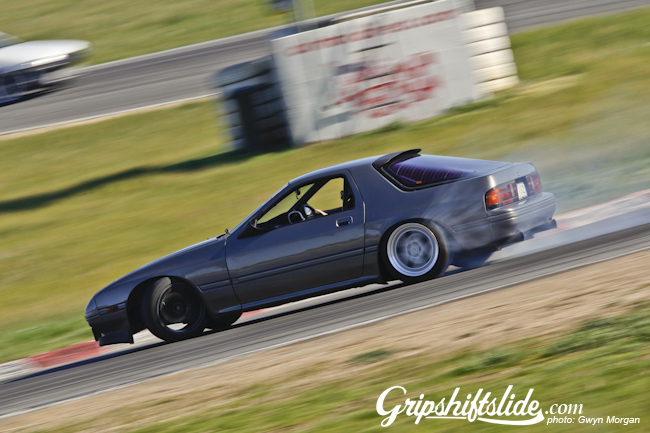 The only Mazda on the day was getting some serious speed through the corners. 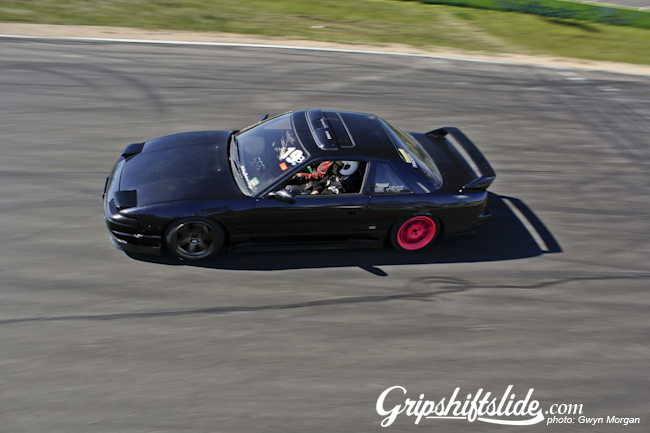 Finding some sweet vantage points around the track was a lot of work.

Sometimes the action got a little too close. 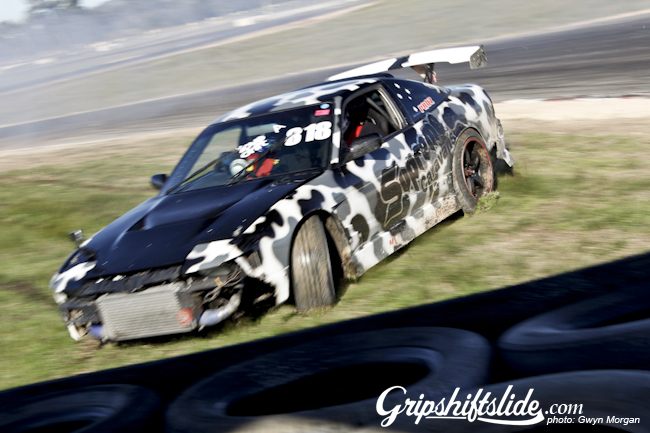 This was still moving pretty damn fast when i snapped this photo. 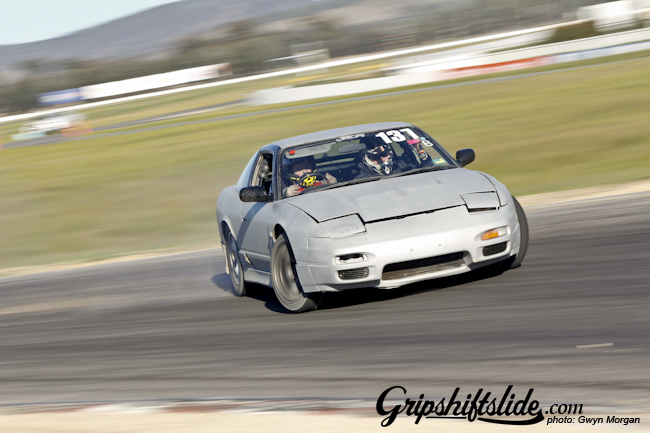 After a quick underwear change it was back to the cars. The sun was getting pretty low which made entries into the straight a little bit difficult for some drivers. 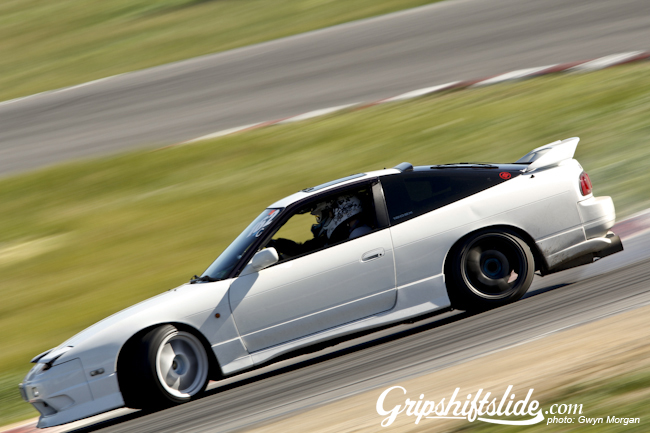 It was easy to forget I was watching a practice day, the speed and precision of some drivers was astounding. 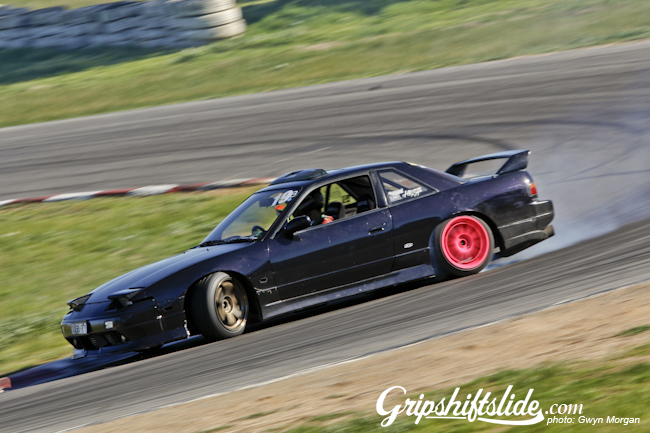 Big fan of this Onevia, linking the corners better then some A class drivers. 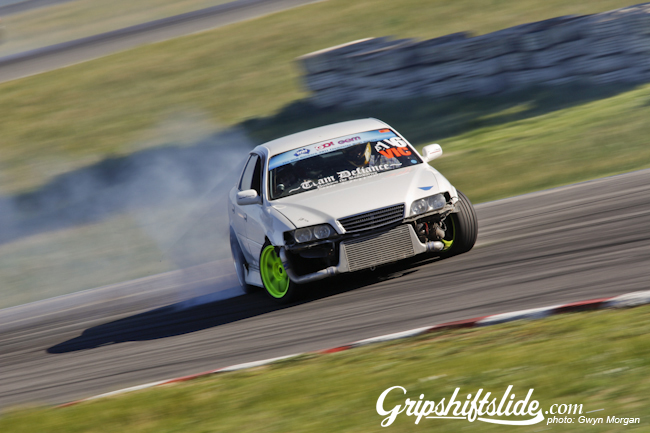 This Chaser did great throughout the day, narrowly avoiding a smash later during some tandem action. 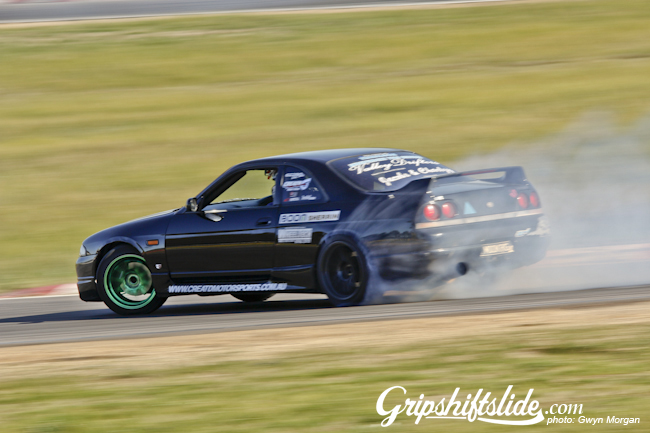 My “mad camera skills” were not enough to catch this tough Skyline spitting some descent flames from the exhaust, hopefully next time I’ll get a better spot in the M section of the track. 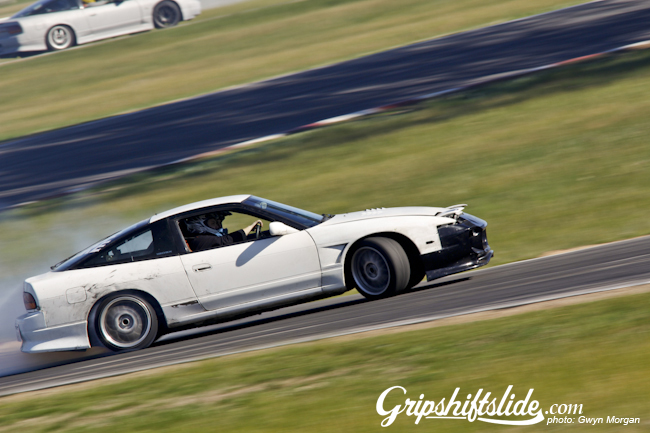 Another car rocking some Team Tuffcore sticker action, this 180sx was another strong performer. 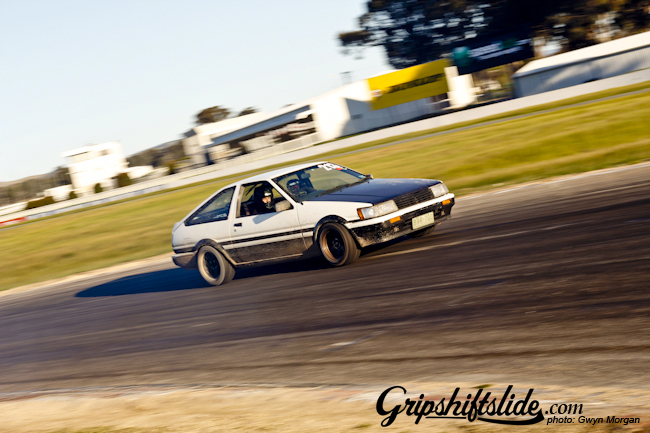 With the sun setting fast, it was time to head back into the pits. 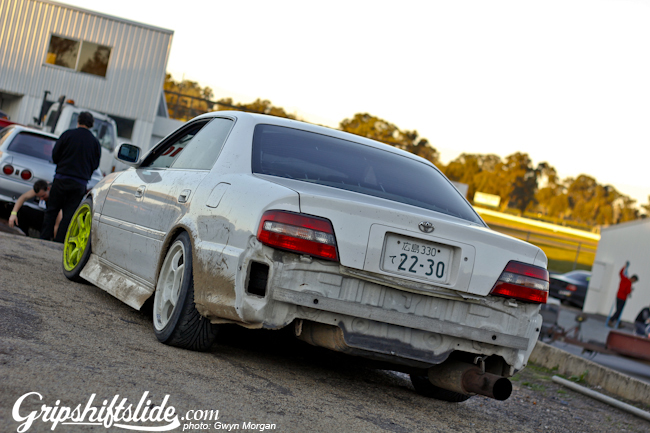 A truly impressive day of drift action.  It was great to see performances from some relatively unknown drivers.
Given the level of driver skill, I have no doubt that some will end up as big names in the Australian drifting scene.
Keep your eyes peeled, we will be covering some of these cars in our feature section over the coming months.
Thanks for reading
– Gwyn.